Ligaments and Tendons around the Shoulder

During abduction of the arm, the middle and Inferior Ligaments become taut while the Superior Ligament relaxes. The radius of curvature of the head of the humerus is greater superiorly than inferiorly, which further stretches these Ligaments so that they keep the articular surfaces of the joint in their close-packed position.

During abduction the greater tubercle of the humerus comes in contact with the upper margin of the glenoid cavity, which limits maximum abduction. By rotating the humerus laterally, this contact is delayed because the greater tubercle is pulled back so that the bicipital groove faces the Coracoacromial Ligament. This slightly slackens the inferior fibres of the Glenohumeral Ligament, allowing an abduction of 90°. Combining abduction with 30° flexion in the plane of the scapula causes a delay in the tightening of the Ligament resulting in a maximum abduction of 110°.

During rotation of the arm lateral rotation stretches all three Ligaments while medial rotation relaxes them. 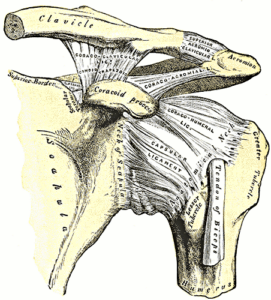