History: 70-yr-old female patient had a fall and injured her TKR operated Knee.

Case: 70-yr-old female had a good Total Knee Replacement Surgery by another Surgeon some 5 years back. She recently fell down and badly injured her knee, this resulted in a patella tendon avulsion. This has a very poor prognosis and gives rise to instability. I operated on her a few days back and a primary repair was done using tunnels in the patella and anchors. I also augmented the patella tendon with a free Semitendinosus Graft. She will be immobilized for 6 weeks. Pitfalls are stiffness of the knee with lack of healing. The scientific literature shows poor prognosis, but this is the best that could be done. Hope that she fully recovers! 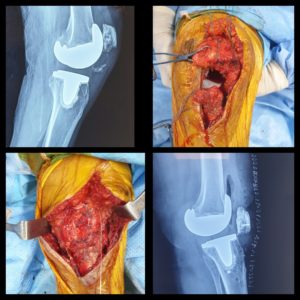